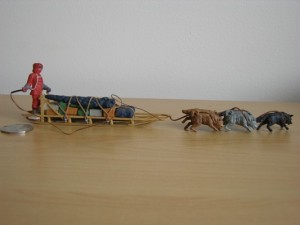 The term Herald plastic figures is synonymous with the word quality in miniature. First released in 1955, with a range of plastic farm animals the success of the range was in the quality of the detail of each figure and this is attributed to Roy Selwyn Smith, who started his career in 1947 moulding and sculpting plastic at Modern Packages a company owned by Myer Zang. Zang spotted the talent of Selwyn-Smith and left to his own devises produced a range of highly detailed plastic figures. In 1949 Selwyn Smith left Zang to join a company who made metal hollow cast moulds for the Timpo range of metal figures and models.

Spurred on by the success both companies had enjoyed through his endeavours, he sought funding to set up his own venture and in 1951 he established Selwyn Miniatures. Money was always tight on the venture considering it was only 6 years after WW2 and sadly Otto Gottstein, one of his main backers committed suicide leaving the business financially bereft. This lead to the moulds being sold to W. Britain Ltd and Selwyn-Smith rejoining Zang (in 1953), where he developed the Herald Miniatures range using Britains as a distributor.

The lower cost of polythene and moulding in brass moulds allowed plastic figures to have greater flexibility and quality over metal figures, and all this was starting to impact on the Britains range of hollowcast figures and in 1959 the Herald trademark was purchased by Britains from Zang.

Early figures are easily identified by a ‘trumpeter’ logo on the base; this logo exists on figures produced between 1955-1959. The 1959 Britains catalogue showed, for the first time, both ranges within the same catalogue and this was the start of a 5 year merger bringing the  figures under the Britains catalogue numbering system and over the period replacing the Herald ‘trumpeter’ logo with ‘Britains Ltd. England’ on the base.