Tri-ang launched their the Minic Clockwork range (1st Series) in 1935 to supply  a gap in the toy motor vehicle market for models between large scale German tin plate toy imports and the smaller Dinky Toys range of diecast models  produced by Meccano. Whether by planning or sheer coincidence the Minic range made a perfect accompaniment to Hornby O Gauge model railways.  Initially 14 models were released and the range quickly established itself enabling Tri-ang to launch a 2nd Series in 1936 with a further 20 models. By 1941 the range consisted of 84 models.

Part of their appeal was their eye catching bright colours, shiny metal radiators and wings, and their ability to travel with their clockwork system, in reality though most body shapes were  very similar and it was left to differing radiators styles to make them resemble the real thing.

As a rule models fitted with tin plate wheels and white tyres were produced pre WWII with diecast wheels and black tyres after the War, however nothing is simple in collecting and some models pre war models can be found with black tyres. Further identification can be found in cars fitted with Shell petrol cans and luggage racks tend to be pre war, with number plates containing the registration number LBL 194 tend to be post war.

Some of the rarest Minic models are the camouflage military issues produced during the early part of WWII, which utilised models from the commercial range with a camouflage finish.  6 wheel lorries with tilt were introduced into the military range during the second world war along with the  Balloon Barrage set, which is one of the rarest and most sought after of all Tri-ang models.

In 1941 the factory was requisitioned for the war effort and production didn’t return until late 1946. In 1948 plastic models were introduced under the Penguin Series and then issued under the Minic trade mark at a later stage, however things had changed, money and materials were in short supply and although the Minic range expanded in part using different materials (and running mechanisms), stiff competition from cheap German and Japanese tin plate imports and competition from the dozens of diecast companies that appeared after the war heralded a slow decline for the Minic range, and for Tri-ang Toys in general  who could not come to terms with these small, low cost competitors together with the change in workplace practises.

In 1971 Lines Bros (Tri-ang’s parent company) called in the receivers and the company was declared bankrupt. Many of the trademarks were purchased separately; however the Minic name was absorbed by Rovex/Hornby and sadly disappeared within 10 years.

More information can be found in our Tri-ang Toys Price Guide.

FROG, which stands for Flies Right Off the Ground, can be traced back to 1932 when the company & trademark were first registered by two brothers John and Charles Wilmot and their friend Joe Mansour. The trio set about developing a small range of ‘Ready to Fly’ 1:32 scale planes with duralin fuselages, paper wings and a propeller driven by an elastic wound mechanism housed within the end of each box. The first FROG was a pre-built model of the Interceptor Mk IV in a RAF configuration (later Belgian, Italian, Dutch, American versions were introduced, together with a model with skis). A marketing & distribution alliance with Lines Brothers (Tri-ang Ltd.) through their International Model Aircraft Company enabled them to bring the model to market and ultimately resulted in FROG becoming part of the toy giant.

However FROG’s ‘eureka’ moment occurred in 1935 when the trio experimented with a new material, cellulose acetate, which was in the advanced stage of testing by SKYBIRDS. This lightweight and much stronger material opened up a whole lot of new opportunities to the company and in 1937 FROG launched their now highly sought after range of factory built and model kit form PENGUIN series models, becoming the very first plastic kits to be made. 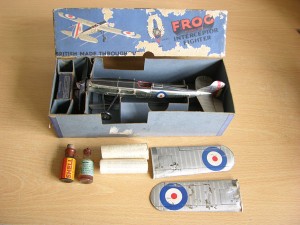 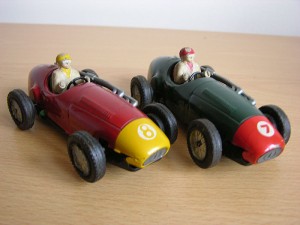