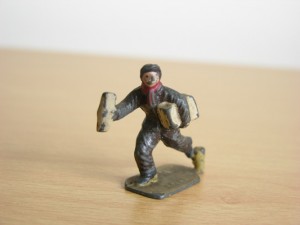 Pictured left is a pre war Dinky Toys 3e Newsboy (running) produced c.1932-39, this is the larger figure (40mm) and not to be confused with the post war version which is slightly smaller at 35mm. 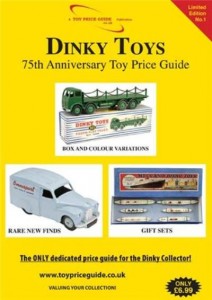 For a complete list of figures and accessories produced by Dinky Toys take a look at our lastest Dinky toys price guide, which catalogues every model & colour versions produced by the company 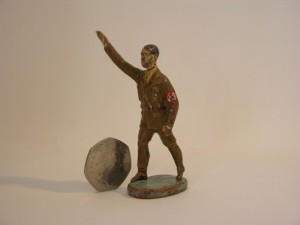 Elastolin figures were first produced under the Hausser name, a Stuttgart based family buisness so named after the two founding brothers Otto and Max Hausser. They developed a technique of making small figures out of a gooey sawdust, cassein glue and kaolin mixture which was then pressed into a brass mold with a wire running through the body and limb parts to add strength, these were then heated and then hand painted.

In the 1930s the company, using the same composition technique started to produce the figures under the Elastolin range and continued toy production until 1943, resuming after World War II. 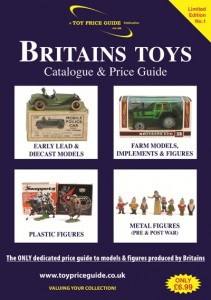 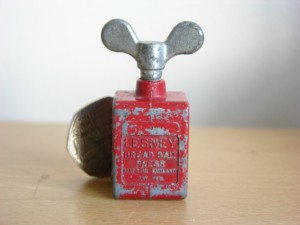 Pictured is a very rare Lesney Bait Press made c.1954.

This novelty item was tooled by the late Jack Odell who was a keen angler on the canals and rivers of North London area and made this for his friends with a few making their way for sale into local fishing tackle shops.

Most versions are marked Lesney Bait Press on the side, however rarer version are marked MILBRO Bait Press, made for a local fishing tackle wholesaler.

They were made in 3 different colours; red, red/green or orange, with the orange variation being the rarest. 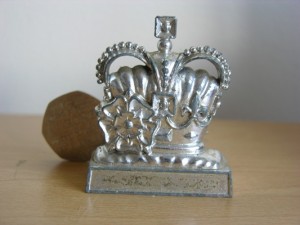 In 1975 Lesney released a range of plated metal Pub Signs, these hard to find emblems are clearly marked Lesney 1975 on the base though sadly collector interest in them at the time was minimal so the range was very short lived making them quite scarce. Measuring 55mm in height and weighing 150 grams there are 14 to collect as follows:

The first flight of the Gloster Meteor took place in March 1943 and upon being fitted with a Rolls Royce Welland engine gave a top speed of  410 mph and flying range of 500 miles. It became fully operational in July 1944 with the RAF 616 Squadron.

Dinky Toys introduced their 70e Gloster Meteor in 1946-49 and in 1952 reissued/renumbered the model 732. Early versions have a blued cockpit and have larger roundels than the later issue. Both issues came in trade boxes of 6