Minimodels of Havant were forerunners in the idea and manufacturer of tinplate racing cars, launching a small range of metal bodied clockwork racing cars in 1952 under the SCALEX name, for play use on bare uncarpeted floors. During this time the leading toy company Tri-ang were seeing diminishing demand for their tinplate Minic range of 1950s styled cars & commercials so developed a range of lighter and cheaper plastic friction models named the Push N Go series and so looked upon Minimodels idea as rather dated. In 1956 Minimodels introduced a tin racing car version to run on a track and which contained an electric motor. Adding TRIC at the end of SCALEX (shortened from electric) they registered the SCALEXTRIC trade mark. This new toy invention quickly caught the eye of Tri-ang, who saw the potential of much lighter moulded plastic bodied cars which could offer higher speed and more versatility around track corners so subsequently purchased the Minimodels and the Scalextric brand in 1958. 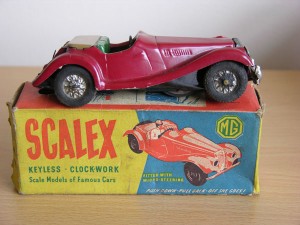 The picture shows an early MG TC model by Minimodels of Havant (c.1954)