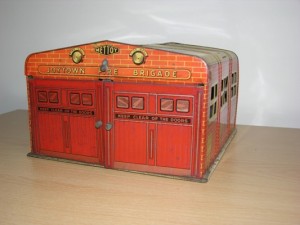 In 1933 Philip Ullman a Jewish settler who owned Tipp & Co, settled in Britain to set up the Mettoy Company and was joined six months later by fellow Tipp & Co worker Arthur Katz, a similar Jewish settler (originally from South Africa). With a factory based in Northampton within two years they were employing 50 staff however the onset of WWII in 1939 meant production shifted from toys to tin plated armaments, land mines and gun magazines as instructed by the Ministry of Defence, who in turn supplied Mettoy with a much larger factory in Swansea to be able to meet the increasing need for munitions production. Being situated further west it was more secure from German air attack, another bonus was the availability of local raw materials and labour.

By 1946 with a much increased factory, which was now over 200,000 square feet in size, toy production resumed however with premises too large for the original tin plate toy production they looked towards the successes of both Meccano with its Dinky Toys range and Tri-ang (and its subsidiaries) who were producing toys from a different materials in particular heavier pressed steel models and plastics. So the business venturing into new areas and in 1948 produced their first diecast models, an exclusive range for Marks & Spencer which was to be the forerunner for the Mettoy CASTOYS range (out of which Corgi Toys grew).

In 1952 the factory installed a plastic injection moulding facility and was experimenting with plastic friction toys which it launched the following year within a shell company called Playcraft Toys Ltd. By the end of 1955 the company had perfected the difficult technique of precision diecasting and the following year launched the Corgi range together with its famous ‘Corgi Club’, the success of which together with changing demand from children for harder wearing toys spelled the end of tin plate model production.