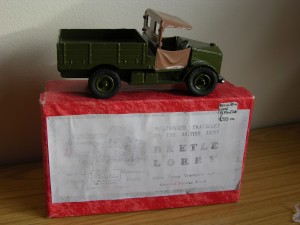 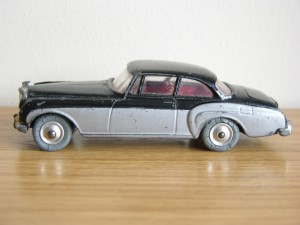 In 1961 Corgi released their Bentley Continental model and in keeping with the reputation of the ‘real thing’ they included several new special features and marketed it as ‘the most wonderful model ever produced!’

Along with the usual Corgi features, standard by 1961, plastic windows, glidamatic spring suspension, plastic vac-formed interior and jewelled headlights were added together with a very impressive new feature, the Automatic Steering System which was added to only 3 models produced in the year; 230 Mercedes Benz 220SE & the Ecurie Ecosse Racing Transporter. Corgi found the new steering system difficult and expensive produce and in 1964 they re-issued 230 Mercedes-Benz without automatic steering and discontinued the system.

Jewelled headlights became a near standard on future Corgi cars and together with rear light reflectors which had 4 small ruby coloured stones set in the model certainly lived up to Bentley quality. The Bentley was Corgi’s second only car to be fitted with an opening part (after the Aston Martin DB4) and inside the boot there was an added feature of a spare wheel placed in a recess.

Adding further glamour a silver plated radiator grille and mascot was included together with a rear bumper for the very first time. The Bentley also had new style ‘shaped’ wheels and hub caps, however one unique feature to the Bentley was the grey coloured tyres, which became the only Corgi model ever fitted with this colour tyre.

Although not produced in many variations Corgi’s Bentley is a very important model in the company’s history, by adding these innovations it moved ahead of Dinky Toys in the eyes of young children establishing itself as the UK’s No.1 diecast model maker. In 1965, after sales of nearly one million units, the Bentley was withdrawn.