In 1958 Matchbox issued the 52a Maserati  4CLT racing car, firstly in red without race numbers which was followed later in the year by a lemon yellow version. The red version was the first of the 1-75 Series to be issued with solid black plastic wheels, which were short lived as they were quickly replaced by spoked wire wheels to give a more realistic appearance. As a result these early solid black plastic wheel versions without race numbers are harder to find. 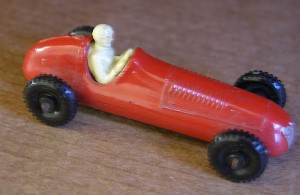