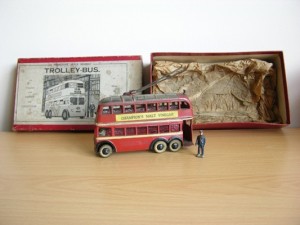 The History of Taylor and Barrett

Two years after being demobbed from the Army following WW1, Fred G Taylor and Alfred Barrett set up Taylor and Barrett in 1920. Taylor (a former lift installer & repairer) and his brother-in- law Barrett (formerly a lead caster employed at W. Britain Ltd) were later joined by Barrett’s brother who similarly worked for W. Britain Ltd. followed by two of Barrett’s sons.

During the first ten years as toy makers their efforts were focussed on perfecting their technique so they specialised in the production of toy soldiers, farm and zoo animal figures for their own distribution and also for 3rd parties including Skybirds, Charbens, Kay, Tri-ang, retailers such as Selfridges and local wholesaler Whyte Ridsdale. During the 1930s they managed to perfect the very difficult fine diecasting process well enough on larger products so widened their range to include drawn carts and vehicles, the earliest of which are the Governess Cart & Pony and a Coolie Rickshaw. All pre war models were marked T&B.

In 1940 their Schofield Road, London, England factory was completely destroyed by an air raid resulting in the Taylor and Barrett partnership relocating to new premises, producing munitions for the war effort. All salvageable moulds were put into storage and following the war end, in 1945, the pair decided to split the moulds and go their own way, setting up as F.G. Taylor & Sons and A. Barrett & Sons, to help demobilize their own families and provide employment.

F.G. Taylor & Sons (who sometimes marked their toys For Good Toys rather than using their company name) and Barrett & Sons both remained in business until the early 1980s, though more as component part makers to industry rather than toy manufacturers.

Some of the most sought after pre-war Taylor & Barrett models include: